Finding Your Voice, Creating Your Path 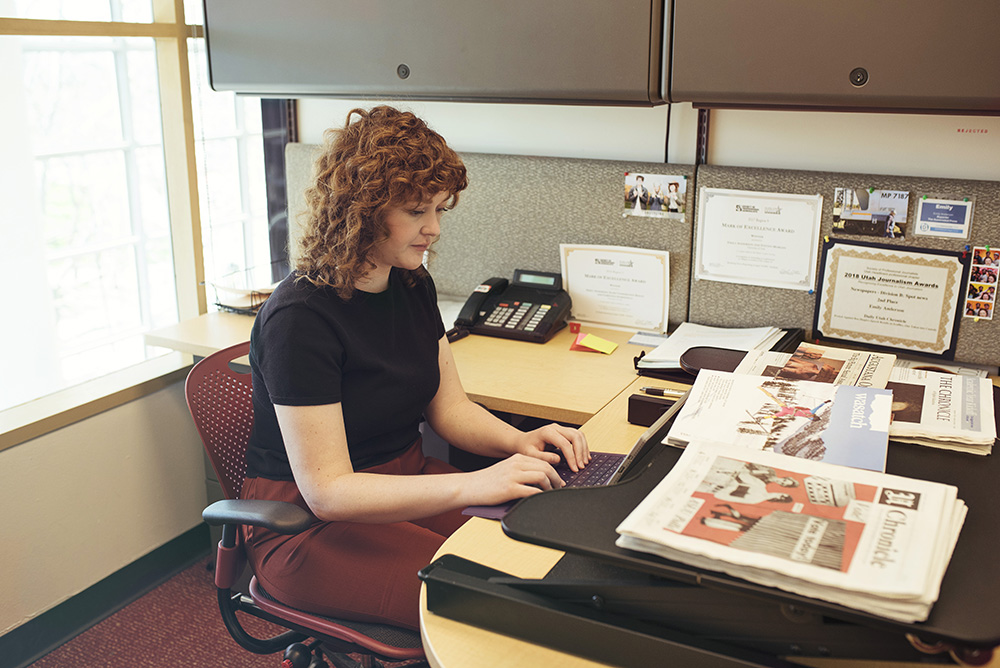 In the past five years, the number of journalism majors in the University of Utah’s Department of Communication has jumped more than 133%. As more students declare journalism as their emphasis of choice and as newsrooms continue to transform in the age of digital media, the U’s program is growing and adapting to create successful graduates. Although the fundamentals of storytelling are the same, the way the stories are told continues to change.

“Students today have grown up with social media and the 24-hour news cycle,” said Avery Holton, associate professor of communication and former coordinator for the journalism media sequence. “They need to be prepared to enter the evolving media industry, where traditional media isn’t the only option”

Holton and his colleagues in the Department of Communication have made extensive changes to meet the demand of the changing media culture. With an already strong foundation in history, law, and ethics, the journalism sequence has added digital and social media skills to the mix to better prepare students for careers within the industry.

“We’ve added intensive courses about editing videos on mobile devices using various apps. This provides students with something to show on interviews. They are prepared and able to make a video package in a matter of hours,” said Holton.

“Our students are extremely driven and have the ability to cover hard hitting topics,” said Holton. “What they seek help with is finding their own voice, figuring out which platforms to use, and figuring out the difference between just telling a story and actually creating a news story.”

The program has also needed to adapt to the type of stories students want to cover. According to Holton, students are no longer as interested in soft news—music, entertainment, and food—as students were 10 years ago.

That’s exactly why Emily Anderson, a current journalism student and writer for The Daily Utah Chronicle, decided to join the program.

“I've always been interested in politics and government, but the prospect of playing a direct role in holding society's most powerful institutions accountable was fascinating to me,” said Anderson. “Personally, I felt journalism was the best way I could contribute to the pursuit of truth and justice.”

icon I FELT JOURNALISM WAS THE BEST WAY I COULD
CONTRIBUTE TO THE PURSUIT OF TRUTH AND JUSTICE. icon

Holton suggests that students are interested in the harder issues not only because of the current political climate, but because Utah is a uniquely positioned state in that there are issues his students face that other students around the country may not.

“Climate and environment and are huge issues in Utah, along with political contention, human rights, and equal rights,” he said. “We have a big LGBT+ population and refugee population, so we have a boiling pot of important hard news topics to cover.”

Holton continues to be impressed by how driven students are to cover these difficult and sometimes controversial topics and is even more amazed by their ability to filter information.

After graduation, some of Holton’s students are still entering traditional jobs in print, TV, and radio. However, some are choosing jobs in branding, public relations, big data, independent weekly news platforms, podcasts, or simply freelancing.

Since taking a course taught and developed by Shannon McGregor, assistant professor of communication and current coordinator for the journalism media sequence, Anderson is choosing the non-traditional route and hoping to start a career in data journalism.

“Although I was completely unfamiliar with data journalism going into the semester, I emerged from the course feeling confident working with data sets and I have now decided to steer my journalism career in a direction that ensures I have the opportunity to crunch numbers,” she said.

Finding a job shouldn’t be a problem for Anderson. According to Holton, students in the journalism media sequence are more employable now than they were five or six years ago. Instead of just having a degree, they have portfolios and a digital identity that’s finely tuned. They also have branding and analytics skills and a collection of stories that are told in their own voice.

“Students realize when they find their voice and they can be creative; they can do things on their own until they figure out exactly what they want to do or they land in a particular spot. Students graduate from the program ready to find success by creating their own path,” said Holton.

The journalism sequence continues to evolve and add new courses to meet the industry’s demands. New this fall will be an investigative course taught by two working journalists—Andrew Becker, news director at KUER and Nate Carlisle, reporter at The Salt Lake Tribune. Students will have the opportunity to gain hands-on experience in a newsroom setting resulting in stronger resumes and portfolios as they head out on to the job market.